In a suicide crisis, the length of time someone seriously contemplates suicide, tends to be short-lived. Over 25% of teens nationally said it was only 5 minutes from the time they made the decision until they acted on it. Another 30% said it was less than 24 hours. That kind of impulsivity, coupled with substance use, can be lethal. Most people who think about suicide do not want to die. They just want to end their pain.  When suicidal behaviors are detected early and one can restrict access to firearms during that time of crisis, we can save lives.

An important piece of any suicide prevention program is reducing access to lethal means or “means restriction.” This refers to making an effort to limit or eliminate the ability for a person at risk of suicide to access the means for their suicide plan.

Firearms are the most lethal and most common method of suicide in the U.S. More people who died by suicide use a gun than all other methods combined. Suicide attempts with a firearm are almost always fatal, while those by other methods are less likely to be fatal. Another important fact is that nine out of ten people who survive a suicide attempt do not go on to die by suicide later.

Many suicide attempts are made impulsively during a short-term crisis period. If highly lethal means are made less available to impulsive attempters and they substitute less lethal means, or temporarily postpone their attempt, the odds are increased that they will survive. Studies in a variety of countries have indicated that when access to lethal means is reduced, both the means-specific suicide rate and, very often, the overall suicide rate decline.

The resources provided below provide information on firearm safety and reducing assess to lethal means.

Other forms of means restriction include:

Reducing access to alcohol is also an important component of means restriction, given that alcohol is a factor in about one-fourth of suicide deaths (IOM 2002). Educating individuals and families about the dangers of alcohol in relation to suicide risk can be an effective intervention. Persons should also be educated about the potential for alcohol to amplify the negative effects of other substances, including prescription medications.

How to Safeguard Your Home: The Helpline Center has put together this brochure as a guide to suicide prevention in the home. Interested in printed materials? Please contact the Helpline Center by calling 605-339-4357. 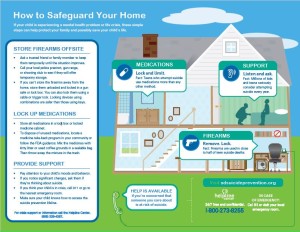